This past week I have had the pleasure of experiencing Palestine with my dear friend, Tali Ruskin, of Jewish Voice for Peace – Boston. Below is her update of our recent experiences.

“The next day, i went to Hebron to meet Ariel, a JVP activist and CODEPINK staff person, who has been staying with Youth Against Settlements (YAS) in Hebron [click here to help support YAS]. there was a new international volunteer who had just arrived, so i went with Ariel to show her around the old city, since a lot of what internationals do is act as a protective presence from the soldiers and settlers when the kids are walking to and from school, when houses are being raided, etc. our first order of business was to walk down to the market (about 1/2 mi from the YAS center) to get shoes for the new volunteer. however, it ended up taking us 3 hours to get down there, as we were forced to play what we’ve been calling “checkpoint roulette.” the most direct route was restricted to us because the soldiers had decided that morning when Ariel walked that way that Jews aren’t allowed to go that way. eventually we made it to the market, as things were closing, got shoes, and then started the trek back to the center. this time we weren’t allowed through a different entrance because the soldiers identified us as anarchists to their commander on the walkie talkie, to which he responded, “ta’if otam!” which loosely translates to “shoo them away!” we took an overpriced taxi back to the center, where we worked with the other international and palestinian activists on the new YAS website.
the next morning, ariel and i headed to Tel Aviv to meet with the Coalition of Women for Peace. Ariel had never taken a settler bus, so we decided to give her that experience. we walked down to the bus stop on Shuhada street, which used to be a bustling palestinian market, but has been closed to palestinians for almost 20 years, so now it’s ghost-town-y, with all the shops closed up (see pics). ariel and i sat at the bus stop for about a half hour watching the only activity on the street – young settler guys out for a run on the empty streets and soldiers going in and out of their base located there. eventually we boarded the bulletproof bus with tens of extremely unfriendly passengers. the ride to jerusalem took forever, as the bus went into every nook and cranny of the settlement before getting to the main highway road. from Jerusalem, we took a bus to Tel Aviv, filled with obnoxious Israeli teenage boys bro’ing out with each other. arriving at CWP was a huge relief! we met with 3 of the staff members, who were all amazing badass feminists. they talked to us about the organization, explaining that CWP overall aim is to bring a feminist analysis to anti-occupation work, and anti-occupation analysis to feminist work. not surprisingly, much of the resistance in palestine is doused in masculinity/machismo, so it was very refreshing to hear from them about their work.

Several hundred women marched in a demonstration for Women’s Rights, marking International Women’s Day on March 8, 2012, in the West Bank town of Qalandiya.

we got an early start the next morning to head to the village of Nabi Saleh. though it’s about 20-30 miles from Tel Aviv, it took us about 3 hours to get there, due to the combination of public transportation and occupation. the entrance to the village was closed off and guarded by soldiers, so the taxi van took us on the off-road route. shortly after we arrived, everyone began to gather at the gas station for the weekly demonstration. there were about 30 locals, and 10 international/israeli activists. i immediately felt a different energy than i’ve felt at the demonstrations in Bil’in. it was much calmer, kinder, and less aggressive. the demonstration in Nabi Naleh is led by the women and children (remember this?). we marched down the road, following the women and children who were holding palestinian flags and leading chants. as we approached the entrance to the village, the soldiers started shooting tear gas, as per usual. the young boys flung rocks in sling shots toward the soldiers. this “game” went on for about another half hour. eventually we all walked back to the gas station, said goodbye to the internationals, and went back to Bassem and Nariman’s house. members of french media came to interview the oldest daughter, Ahed, about her involvement in the resistance. the reporters had wanted to see some photo album, but ahed couldn’t find it since their house had recently been raided by soldiers, who most likely took the album. this is something they often do to help them connect who knows who, etc. 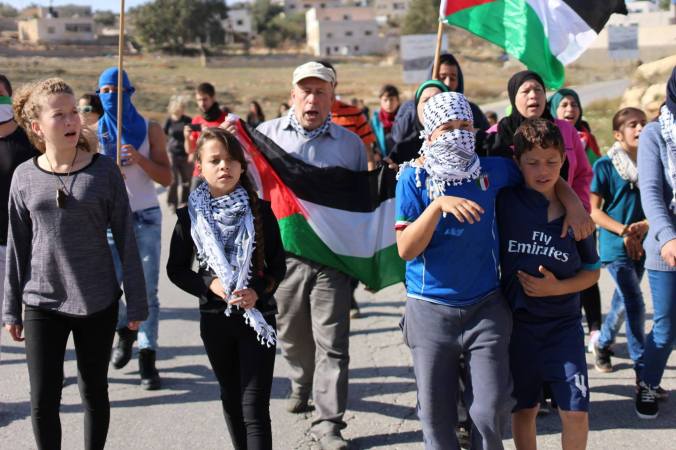 Ariel and i then went to interview the mothers of 3 of the 17 members of the Tamimi family who are currently in israeli prison, charged with throwing stones at soldiers. many of them are on the Nabi Saleh soccer team. We are working on getting a campaign going to get them released. the interviews were as expected. extremely heart wrenching and painful to listen to. for all of the ones we interviewed, it was not their first time being arrested. we stayed overnight at Bassem and Nariman’s house. right before bed, Ariel looked at her Facebook, and learned that the YAS center in Hebron was under siege by settlers and soldiers, the coordinator (Issa) and one of the activists (Ahmed) had been arrested. so instead of staying in Nabi Saleh on saturday for the big soccer tournament they organized for all the neighboring villages, we hit the road for Hebron first thing in the morning. 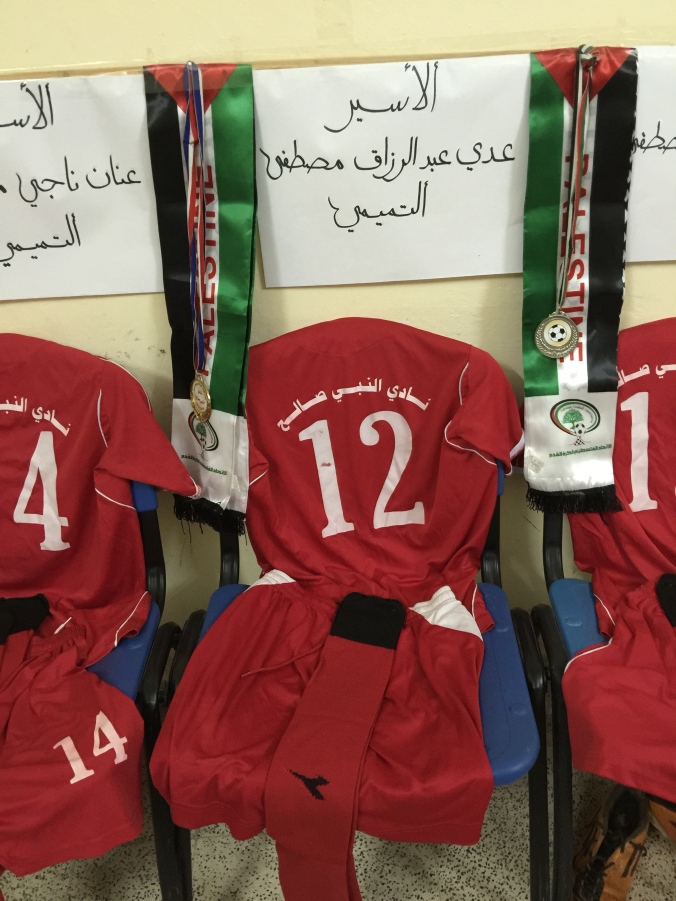 when we finally arrived at the YAS center, we saw a group of about 50 settlers eating lunch at tables set up outside of the YAS center, surrounded by soldiers to “protect” them from the palestinians and internationals. they had been there since the night before, when the soldiers had come and arrested Issa and Ahmed. we sat at the center with the other palestinian, international, and israeli activists, watching the settler families enjoy their lunch with the utmost air of entitlement and smugness. we watched as the settler kids took over the soccer field where the palestinian kids had been playing. when the settlers started singing (er, whining) shabbat melodies, ariel and i decided to sing our own. we stood at the gate of the center, looking out onto the settlers, and sang Shabbat Shalom Hey, Hinei Ma Tov, Lo Yisa Goy, Shalom Rov, and a couple others. one of the palestinian activists, Sohaib, joined in for Shabbat Shalom Hey! 🙂 the singing roused confusion and curiosity in the settler kids who slowly started congregating near the gate, staring at us, extremely baffled. i saw some of their lips involuntarily moving to the words that are so familiar to them. 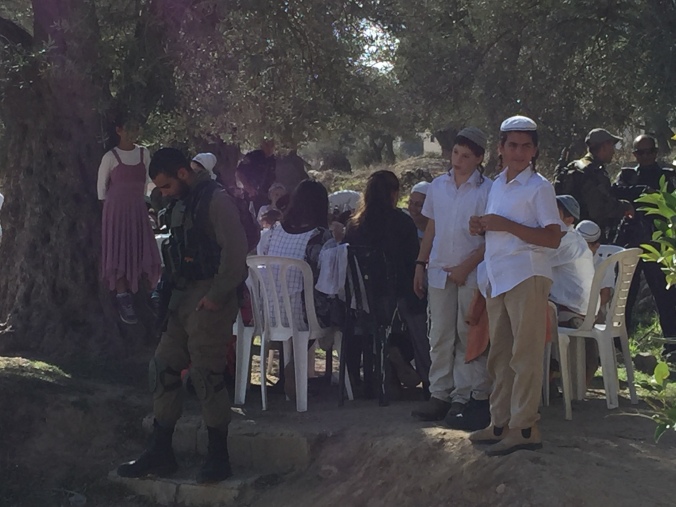 Sohaib and Ariel walked me down to where i got a ride to jerusalem. on the way, as we passed by a settler family, and i heard the 5or6-year-old son who was holding sticks say “abba, lizrok al ha’aravim? dad, should i throw these on the arabs?” i told him “lo lizrok! don’t throw!”

**Since October, Youth Against Settlements (YAS) has been facing massive violent attacks and targeting by the Israeli military and fanatical Israeli settlers. These have included, arrests, raids, detainments, intimidations, harassments, restrictions on freedom on movement, theft and destruction of cameras and media equipment, stones being thrown at them, and more. Your support is greatly needed. Please help by donating here – Ariel Gold